When revolution came in France, an angry crowd reached emperor’s castle by travelling 25 miles in no time. Quite astonished and confused at the arrival of such a huge crowd in no time, the emperor asked his minister that how would these people managed to reach there in short interval of time. The historic reply by his minister was that “the hate brought them there.”

Whenever a sense of hatred is developed among the people against the cruel policies of the government such a big crowd is inevitable. Same is the situation of our country today.

When two parties i.e PTI and PAT has gathered a huge number of people in the federal capital Islamabad to protest against the brutality of the government. 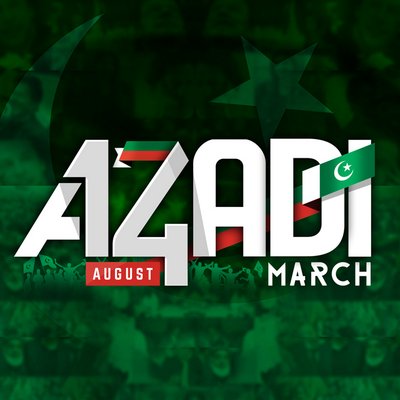 The circumstances that resulted in the form of a big long march are known to every Pakistani today. According to PTI, the PML(N) government was founded on the basis of rigging in the election 2013.

And despite of protests held by PTI for more than 14 months PML(N) did not pay attention towards their demand for opening 4 constituencies where the rigging was claimed to be done on the behalf of PLM(N), and consequently Azadi march become evident.

Now as the march has reached Islamabad the only demand of PTI is the resignation of the PML(N) government and midterm elections. PTI would not agree on anything except these demands. On the other hand PML(N) is still not moving forward to resolve this situation.

Yesterday PLM(n)’s stance became more weaker after the decision of judicial commission’s report about model town’s incident in which chief minister of Punjab Shahbaz Sharif and his 13 cabinet members are declared responsible for the massacre of 14 people at model town. At the time of formation of this judicial commission CM Shahbaz Sharif had declared that if he was found to be guilty, he would resign at once.

But like all other promises of Shahbaz Sharif before election this promise of resignation has become only a political statement and nothing else. On the other hand PTI chairman in his address has declared that they would march forward tomorrow towards parliament house if CM and PM did not resign. And if such advancement happened, it would result in a clash between crowd and the enforcement agencies and the conditions will become worse.

In order to solve this situation government will have to show flexibility towards the demands of PTI and other political parties must play their positive role to make the situation under control.