Hollywood Movie Hotel Transylvania in 3D has been one of the most well-known and tremendously appreciated 3D animated movies. The movie has been produced by Sony Pictures along with the coordination of Columbia Pictures. This movie has captured the voices of many renowned and famous actors and actresses. This film has been put forward for the people on 28th September 2012 at Toronto Film International Festival. In the beginning this film gained many critical reviews from critics but the population has just fallen in love with this animated movie. The film has earned the amount of $ 85 million in just opening first week. 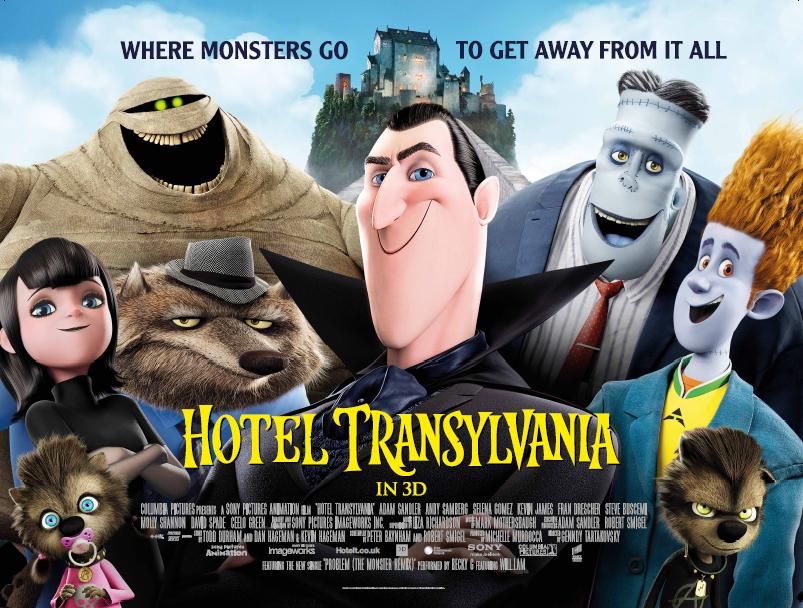 This film turn around in the region of the hotel named as Hotel Transylvania. In this hotel all the monsters carry out the stay at night from the human world. Dracula who was the owner of the hotel invites all the monsters from all around the world to carry out the merry making of his daughter Mavis 118th Birthday party. During the party a 21 years old man visited the hotel for a stay and Dracula daughter Mavis fall in love with him. Now the Dracula has to carry out some steps for saving his daughter from getting trap into his love before it gets too late.

In the cast the voice has been lend by many famous and popular actors and actresses. The voice of Dracula has been given by Adam Sandler, Mavis as Selena Gomez, 21 years old boy as Andy Samberg, Mummy voice as Cee Lo Green, wolf as Steve Buscerni and Invisible man as David Spade and so many others.

This film has been in the production since 2006 by David Feiss and Anthony Stacchi. The film has been even comprised with huge sum of the songs as well that includes “Call me Mayy performed by Trcai L, “Good Time” by Owl City and “Zing” has been carried out by Static Revenger and written by Adam Sandler.

Well on the whole this was for the animated movie Hotel Transylvania. We are hundred percent sure that you will definitely have taken fun in the review. Will the Dracula stop his daughter? Will she fall in love with the boy? For knowing all such answers you have to watch this movie and we are sure that you take full time pleasure in this animated movie. WATCH IT NOW………..