On 12th November 2012, the President of Muslim league (N) Mian Naawaz Sharif addresses with the youth of Pakistan regarding student Punjab laptop scheme and allocation event for the youth internship letters. 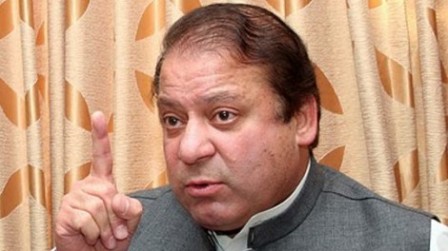 This event was organized in National Hockey Stadium, Lahore. The event was over-crowded with the maximum number of 20,000 young generations that was merely there for the success and bright future of Pakistan. Nawaz Sharif begins with the address by showing appreciative words for the Chief Minister of Punjab Shahbaz Sharif.

In the beginning of his speech as on one hand he acclaimed the working of Shahbaz Sharif then on other hand he also noted the passion and enthusiasm in young generation that is enforcing them to bring away some new change in the country.

He said that such similar events should also be organized in the city of Karachi because still it is the City of Light for every single person. All such cities who are witnessing this event ceremony on television they will be proud to identify that this young youth has finally awake for fighting for their own future.

He further claimed that the present Government has just put down the country in the darkness but ones they will appear in the form of government they will surely bring out the light of hope for every single person.

MAIN AIM OF THE EVENT INAUGRATION:

In the Student Laptop Scheme and Internship Letters Distribution ceremony almost thousands of laptops were distributed in between the qualified and educated students. In addition the Government of Punjab will also be offering the internships for the skilled students through the internships letters.

These whole allocations of laptops and letters have been specified all through the merits decisions. Such students who have stand perfectly for the merit will be awarded with the laptops and internships. Most of the politics have been stating them with the words of criticism as it has been just undertaken for grabbing the attention of the young generation because elections are all near.

But the main aim of the event has been merely to provide the jobs opportunities to the students because majority of the people resting in Pakistan are jobless. On the whole this organizational event was merely in the beneficial favor of the students as this would even motivate the backside students as well to take increased knowledge and acquire the opportunity of internships and laptops.