Last week the sad news was being flashed on all the channels that the on the Monday morning Asha Bhosle daughter Varsha Bhosle’s  attempts suicide. It is an extreme lose for Asha Bhosle. Varsha Bhosle was 56 years old and she was one of the known columnist and a famed playback singer as well. She was the daughter of legendary and well known singer Asha Bhosle. On the Monday morning Varsha Bhosle was founded dead in her house at Peddar Road. According to the reports she has shoot herself with the bullet in her head. She has made the use of licensed and full proof registered pistol. 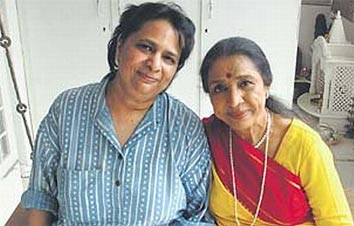 This sad incident was undertaken on 12:30 where the Additional Commissioner of the South Police has started the investigations. Asha Bhosle told the media that her daughter has never told her anything about the fact that she has owned or registered for any pistol. The police investigation staff has said that they are still on their mission for making the clear that on whom name the pistol has been registered and before the completion of the inquiry it would not be suitable to arrive any conclusion.

Furthermore, the police also even carried out the questions investigation form the housemaid and she has told that she knocked at the door many times but Varsha didn’t answer anything then she contacted the driver. The driver entered into the apartment from the door of Lata Mangeshkar house and Varsha was witnessed lying on the sofa with the gun in her hand. Well apart from the media has also revealed the fact that the Varsha Bhosle was divorced from her first marriage and her depression has made her disconnected from the whole world.

The treatment was being undertaken to bring her back to the normal life. Before this incident even in 2008 Varsha Bhosle also attempted the suicide by taking the overdose of sleeping pills. When Asha Bhosle was reported about this sudden accident at that moment she was attending the Marathi International Film and Theatre Awards and she instantly drive back to India without any delay.

Well the dead body has been given back to the family for offering the last ceremonial procedures after the post mortem at J.J Hospital. We on the whole we would say that may her soul rest in peace and may God give Asha Bhosle full courage and patience to get over with this sad occurrence in her life.