End of Time “The Lost Chapters” with Dr. Shahid Masood In 2014 they were Predictions, In 2015 they are Happening.

After Long Time (Hidden Truth, End of Time by Dr Shahid Masood) on air ARY TV Network. Now Part two on air on news one in Name of ” End of Time ‘The Lost Chapters’ ” its very famous documentary tv show.

As we all are aware from this fact that Dr. Shahid Masood is far and wide esteemed and appreciated for his views on the sections of politics, on the views of the sub continent.

Being a popular figure in the Muslim community, he has been commencing this show End of Time “The Lost Chapters” – Dr. Shahid Masood which is aired on every Saturday on the channel of NEWS ONE sharp at 10:00 p.m.

What This Show Is All About?

In this show, what Dr. Shahid Masood is trying to tell us about the hidden truth. He clearly and brilliantly relates the symbols and signs of the end of time. Through his deep and intense kind of knowledge, he makes us become conscious and make us understand that how much we are close to the Day of Judgement. According to him, this Day of Judgement will soon be arrived and he has proven this fact through his deep facts.

What Picture Does Hidden Truth Show Us?

Hidden Truth, End of Time by Dr Shahid Masood tells and gives us the picture and conceptualization about the Qayamat. He tells us that the“The Dooms Day” or “Judgement Day” will be ariving sooner. He also tells about the Mehdi concept and all the other different concepts that are linked with imam Mehdi. With thorough and complete analysis, he has presented the concepts of Dajjal or you can say Anti Christ or the Masiha of Jews in accordance to Islam, Christianity and Judaism.

What Questions Does This Hidden Truth Answer:

You might have these questions that “How will the world end? Most of the human beings have thought about on these questions and issues since time immemorial. It has been year’s after years that our religion, Islam sheds significant approaching into this subject. Through this show of Hidden Truth, End of Time by Dr Shahid Masood, he has somewhat succeeded to make these facts and information easily reached to us. This show also comes in DVD and all the talk-shows of his which were previously aired on the ARY Digital can be received in this DVD. He has analysed this interesting debate on this particular issue in a very conclusive and deducible way.

Dr. Shahid Masood had this feeling that there is a dire need for a Muslim to get to know about this time. This show is all about the religious debate. We have number of books in the market that are available and they portray the Jewish and Christian perspectives but not a single Islamic book portray this perspective Dr. Shahid Masood gave us a compilation of facts and all the signs that have been prophesised by the Qur’an and also by the Prophet Muhammed (peace be upon him).

The Day Of Judgement:

This is the day when life will actually start to begin. This will be our real life. This show Hidden Truth, End of Time by Dr Shahid Masood tells us about an unforgettable tale and some life changing stories. It tells us about our journey towards the Eternal destination. He has very well stated that how the plane of judgement will land and how it will take all the people with it.

Dr. Shahid tells us that on the judgement day, only those hearts will be trembling who are the criminal one. Heart of the negligent and hearts of the arrogant, cruel, rebellious, who consider theirselves Gods, they will be fuelled in the fire of Hell and all the innocent and true believers will be placed in Heaven. On this deciding day, a new life will begin and it will be a never ending life. On this Day, people will be standing lost and speechless.

This Hidden Truth, End of Time clearly state that intense kind of fear will be seen on the faces of people. “The Dooms Day” or “Judgement Day” facts have been revealed in this program. If you want to know the hidden truth about this “Judgement Day” and if you want to enlighten yourself with the facts and revealing history of“The Dooms Day” then this program by Dr Shahid might enlighten you will all those important facts that Islam tries to tell us.

Criticism on this The Hidden Truth, End of Time:

Both negative and positive criticism has been given to this program. Dr Shahid duty is only to enlighten us with the facts of “The Dooms Day” or “Judgement Day”. Make sure that you watch this program on the channel of NEWS ONE sharp at 10:00 p.m and let us know your analysis too that how much you find this program fruitful and productive when it comes to “Judgement Day”.

End of Time -The Lost Chapters

END OF TIME – The Final Call with Dr. Shahid Masood only on ARY News 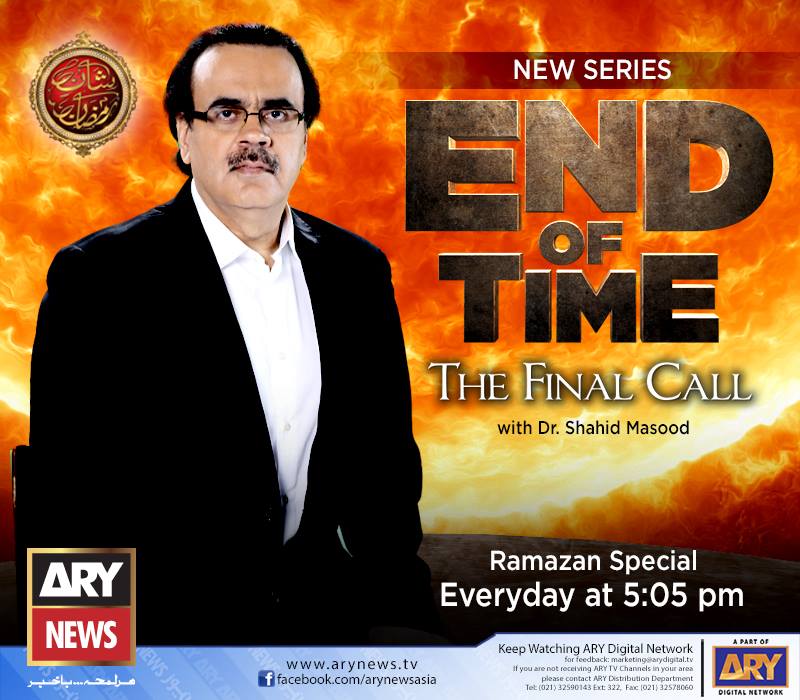