Google Inc. is an American technology and multinational company. A company that is specialized in internet based products and service. These include search cloud computing, online advertising technologies and software. In short it is a well known form of internet website from where we can get each and almost every type of information. Google provides lots of features but with the passage of time it increases its qualities.

As Google provide Google Maps for its user but now people who use Google map now have more facilitating feature of Google’s live traffic. It’s really good news for the Google Map user in Pakistan that Google live traffic feed is now available in Pakistan. This feature makes the experience of using Google Maps even better.

This exceptional feature of Google was introduced in 2012 and is currently functional in several countries worldwide. This new feature of Google enhance the qualities of Google Maps and essentially tell the user the appropriate time will take them to reach their destination and information totally based on real time traffic data.

For this live traffic feed data is gathered through the information from android user who checked the My location and via third party service on Google map. Through this feature motorway Google maps would be able to determine that there was traffic that slowing down the whole flow of traffic.

Live traffic feature of Google Map is an incredible feature. This feature saves us from the confusion of choosing right path through which you can reach to your destination on time. 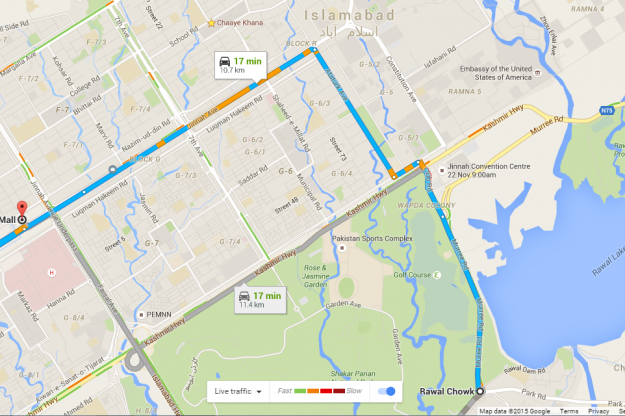 Through this feature when we setup a destination point or location, you will not only be able to choose which route you will use, but it also show different colors on your paths. These specific colors show the traffic condition on your way to specific location or destination.

Red: represent the slowest speed of traffic on highways and roads.

So, to save your time you have to avoid the red area.

Active this feature on your device:

Here is way that tells how to turn on this feature on your device.