It’s very sad to note that just a few hours back Japan experience Powerful 7.3 earthquake. With the appearance of this earthquake Tsunami alerts have also been raised in the northern sides of Japan. This is certainly shocking news for the whole world because the shakes height have been so huge in quantity that has capture every single person into fear and terror. The reports have been revealed that the earthquake shakes has been witnessed at the limit of 7.3 magnitudes that struck the coast as well. 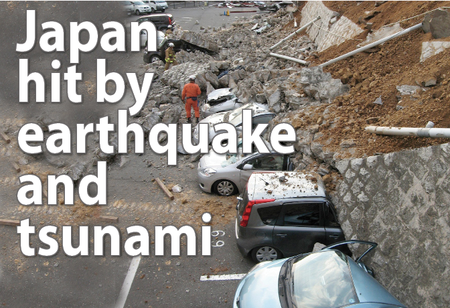 As the Earthquake hit the northern areas of Japan the Tsunami warning was warned to all the people because it was thought that after shakes can also be appeared so all the people were alerted to travel at the higher places or grounds. According to the survey of the Geological survey this Earthquake has been struck till 36 kilometers under the Pacific and 245 kilometers at the southern side of Kamaishi. This has been not the first time that Japan has witnessed any such disaster. Just few years back Tsunami has also killed 20,000 people and even still many people are missing.

Further, it has been reported that almost one meter high Tsunami shakes have been hit at the coastal side of the Northern Japan. But nevertheless the good news is that there are no missing and life losing news in view of this earthquake and no buildings have been collapsed. But still we have to wait for few hours because it might happens that in such places of Japan this earthquake would have appear as dangerous and life threatening.

However, one of the useful things about the Japan establishment was that they take immediate precautionary measures and inform all the citizens to move towards the higher level of areas so that they can save from the after shakes. In addition, they even empty all the buildings from the people because there was the danger of being falling down.

Well on the whole of the discussion we would say that it’s time to pray that may God save us from all such natural disasters as not just the Pakistan but even the whole world. This world will surely come to an end one day but just pray that everything ends with peace and calm without any disaster or any other such calamity. Let’ see will any life loss or property damage new arrive or not.