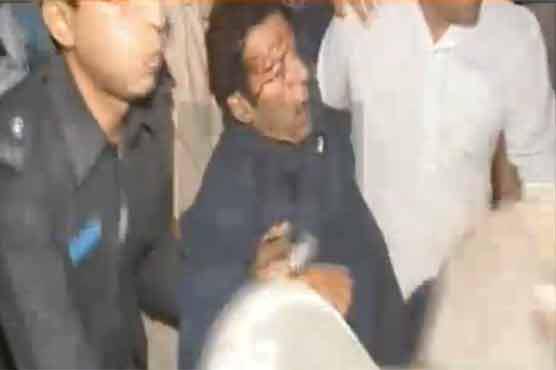 It was an unfortunate moment when Imran Khan was Imran Khan was just about to make the speech in front of his supporters. This procession was going to take place in Ghalib Market, Lahore at 7pm. Since the arrival of the elections, Imran Khan has been one of those candidates that have been coming ahead with the strong and much powerful public support. Hence, as soon as he was fallen down from the lift he was immediately taken to the Shaukhat Khanum Hospital. The medical staff of the hospital has stated the report that now Imran Khan has been out of there whereas total 11 stitches have been finished in his head. However, he needs proper rest and sleep.

Well this has been one of such incidents before the elections that have shown that still all the politicians do have some soft corner for one another. All the politicians including Nawaz Sharif, Shahbaz Sharif, Asif Ali Zardari, Altaf Hussain and many other renowned personalities have requested the whole nation that just prays for the health of Imran Khan. All his supporters and the fans of PTI in every single hook and corner and on the social websites are sending their get well soon wishes to the Imran Khan. On the other side all his supporters who have just came to attend the Jalsa they have all settled right at that place and have raised their hands high up in the sky.

Well now let’s see that will Imran Khan would be able to continue his election campaign for the next days because it has been so unfortunate that during the last two days such an incident has taken place in PTI. But still all his supporters have not been affected and still their morale and passion is high up in the sky.

Now we just have to pray for the health of the Imran Khan because the whole nation is still with Imran Khan and this tsunami will never going to settle down for sure.