Here we will discuss the Lahore Lions Vs Faisalabad Wolves Highlights and Closing Ceremony. All cricket lovers who would love to watch cricket matches we would like to mention that they should watch the final match between Lahore Lions and Faisalabad wolves on 9th December 2012 in Lahore. For our readers we would like to mention the time of this exciting match is 16:00 local time. We are completely sure that this final match will be completely excited and thrilling. Moreover, we hope that every cricket lover wants to know the brief introduction of these two teams. Well for their convenience, we briefly highlight the players of Lahore Lions and Faisalabad Wolves. 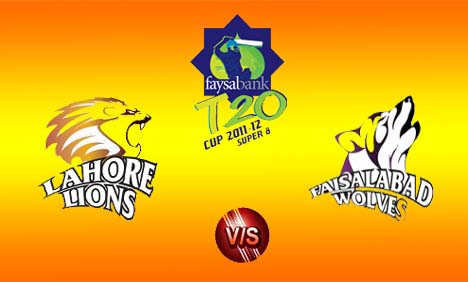 Hence, we can say that Lahore Lions and Faisalabad Wolves are considered to be best cricket teams. For getting the updates, all cricket lovers should visit webpakistani.com for knowing the score card and highlights.

As we know that final match of Faysal Bank T20 is going to be held on 09th December 2012 at Qadaffi Stadium, Lahore. The two cricket teams that are going to play are Lahore Lions and Faisalabad Wolves.

At the same day, the most exciting and enjoyable closing ceremony will be celebrated after the final match gets over. In this closing ceremony, many leading bands will be performing like RDB UK Sahara band and Hadiqa Kiyani.

Now Faisalabad Wolves are doing their batting for completing this task. Finally, we can say that we are completing sure that the final overs of this final match will surely be exciting and adventurous. So all cricket lovers should not miss that coming overs for seeing the complete match. Let’s see that who will win the final match of Faysal Bank T20 and who will win the trophy. Because this tournament holds great importance for the senior players and fresh players. Both types of players can easily show their talent.

Lahore Lions won the toss and elected to bat