Main Hoon Shahid Afridi: Do you know that Main Hoon Shahid Afridi movie is releasing soon for its fans? Well this film has been in a lot more rumors for the last few time periods. This film has been all about the life history of famous Pakistani Cricketer Shahid Afridi. This film will be implicating the story of his entire cricket career including his downfalls and huge fame in his career. In the beginning the poster of the film was kept a little bit secret for the viewers but now its fake poster has been all released and now the time to wait around has been all came to an end.

Nevertheless all those internet users that are watching out this poster we would like to mention out for them that this is an unreal poster. The producers of the film has claimed that this poster does not belong to the film therefore it has been decided to remove it from the websites.

In Pakistan films and cricket are the two most well known favorite passions amongst the people and now this passion has been highlighted in the form of the movie. Main Shahid Afridi Hoon is produced by Humayun Saeed. Well the trend of making the films on the sports have increased tremendously after the great success of “Chak De India”. 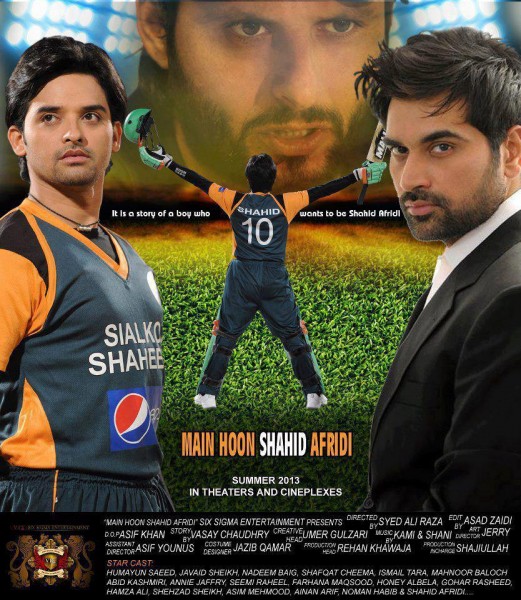 The image of the Shahid Afridi will be implicated in the face of the Noman Habib who is playing 19 years old boy who struggled hard for making his place in the universe of cricket. Another most interesting thing about this movie is that it will also be accompanying the item song by Mahnoor Baloch as “Charati Jawani”.

Along with Noman Habib as the lead role other cast of the film includes Humayun Saeed, Javed Sheikh, Nadeem Baig, Shafqat Cheema, Ismail Tara, Abid Kashmiri, Annie Jaffry, Seemi Raheel, Farhana Maqsood, Shahzad Sheikh and Shahid Afridi himself. The film is directed by Syed Ali Raza and the movie has been all expected to get released for the fans by this coming summer.