Have we ever thought that what would be the effects if we stop non Pakistani dramas and shows? In Pakistan television world there are many shows that are currently running on our television screens and are often leading towards the damage of our own culture and traditions. One of the greatest dangerous effects of all such shows and dramas is the one connected with our forthcoming generations. It is not directing the right paths to our children and young generation adults. The things that they witness in the shows and dramas they try to adapt all such things in their real life as well. 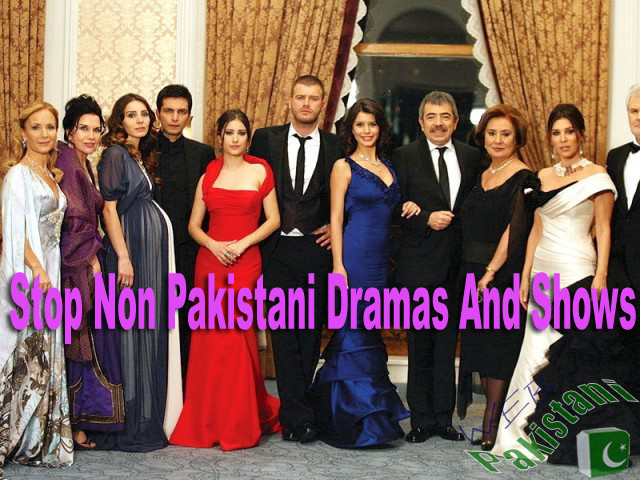 In many of the Non-Pakistani Dramas it has been shown that many girls spend their whole life waiting for the white horse prince and at last when they turn at the age of 50 they find the prince. But this reality doesn’t exist in this real world but there are many girls who actually wait for their prince. In many serials the parties are held in late nights and most of the boys and girls even wish to carry out such activities in their life as well. But they forget to clear their mind that we as a Pakistani and as a Muslim we have some limitations and lines that should not be crossed at any level.

Next we will talk about the Non-Pakistani Shows. Currently, Big Boss has been on-air running on one of the Pakistani channels. The way they are depicting the surroundings and rivalry in the show is not accepted in our society. They are showcasing such emotions and such items in the show that cannot be adopted within our culture at any means. In addition, another most known musical show Sa Re Ga Ma is also seen on one of the channels.

There is no doubt about it that this show will even help other people to get closer with their inner talents but what is the use of highlighting such shows on our channels. Our Pakistanis has also been covered with many abilities and magnitudes then what we can’t create our own shoes and compete with the other shows. Well on the whole we would just figure out one conclusion that all such non Pakistani shows and dramas that are so much appreciated by the public they are in reality contributing in destroying the image and personality of our children.