Wasim Akram has one more time knotted into the relationship of marriage with the Australian girl named as Shaniera Thompson. The local reports have been received that on the evening of Wednesday the King of Swing and Australian girl got married to one another. This marriage was held in the Muslim customs as in the form of Nikkah. This ceremony was held in Lahore in the appearance of the family gathering. No such big stars and media were invited in the ceremony for great coverage. 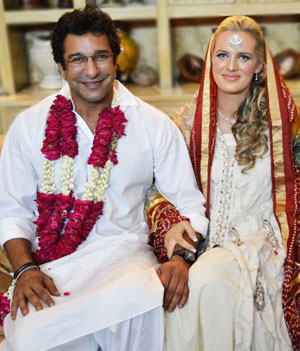 In 2009 Wasim Akram wife Huma got died in a natural death! He is 47 years and has two sons from the first wife. Wasim Akram has told the media that his sons has no such trouble with the marriage and they are all set to ready to accept the love of their second mother. In addition it has also been reported that Shaniera has all converted to Islam and will be staying back in Pakistan after the marriage as well. Wasim Akram has been quite happy with the new starting of the life. In addition Shaniera even take it as her good luck that she has got Wasim Akram as her future partner.