Well every single person would be aware from the record when the Pakistanis makes the largest human flag and makes the Guinness World record in Lahore. Flag is so far considered to be one of such ingredients of the country that symbolizes the dignity and respect stand of the country. 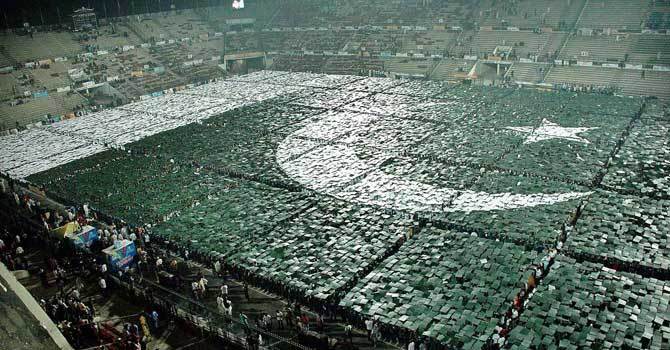 Few months back Youth Festival was arranged in Lahore by Government of Punjab. This event involves the young generation and commences many sports events and festivals. On the other side this event even highlighted the talent of many young people that was even accounted in the Guinness World Records and in such records there was the record of making the largest human flag with the help of people. Almost 25,000 students and young people took part in this record. It was one of the most complicated tasks that were achieved with the help of the students of diverse schools and colleges. At first this record was in the hands of Japan but now Pakistan is ruling over this record. It was just possible all through the cooperation of the students and their hard work.

All the students have been practicing this event for quite a long time before the commencement of the record. When the record was firstly made it seems like there was a great brotherhood and passion for the love of the country. All the students were holding the flags in straight position and in one row. Apart from it the greatest achievement was made by the Government of Punjab for arranging the event in the disciplined manner and with full proof security plans. As we know that the Lahore City has always been on hit list of the terrorist so it was immediate need to get filled with all security proofs. However, all the security checking was taken under the custody of the police and discipline was highly reflecting in the whole arrangement of the event. And this has been merely possible with the supervision and support of Chief Minister of Punjab Shahbaz Sharif. By the grace of God all the processes and every single festival just went in well manageable and thrilling manner. Well on the whole we hope that in the next year as well Pakistan should appear as a king in the Guinness World Record Book and we will definitely raise the hand for prayer that all the Muslims must live united in the same manner as it was witnessed while making the flag.